Power and potential of the next generation

Reigniting America’s civic ecosystem – at Universities and beyond.

Berkeley, BYU and a Canary in the Coal Mine.

What do Berkeley and BYU have in common?

BYU is the nation’s most consistently “stone-cold sober” school with a focus on upholding traditional values. UC Berkeley has become the country’s quintessential progressive bastion with a reputation for challenging the status quo whenever possible. It would be hard to find two campuses that better capture the political divisions roiling college campuses across America, divisions also striking deeply – even dangerously – at the heart of America herself.

Yet for those seeking solutions to this divisive status quo, we think it might be equally prescriptive to look past campus differences and attend to a striking generational commonality university students everywhere likely share: fewer Millennials reportedly believe that it’s “essential to live in a democracy” (Foa and colleagues, Journal of Democracy). For young liberal Americans, vulnerable groups perceive the larger ideals of democracy as having failed or disadvantaged them. For young conservatives, globalization of democracy has brought forces they think are deeply hazardous to the health of civil society itself, so they’re willing to rely on increasingly desperate measures to stop their progression. (And students at both campuses aren’t likely to have received the civic education that benefitted their parents’ generation or have their grandparents’ visceral grasp of the dangers that exist outside of liberal democracy.) 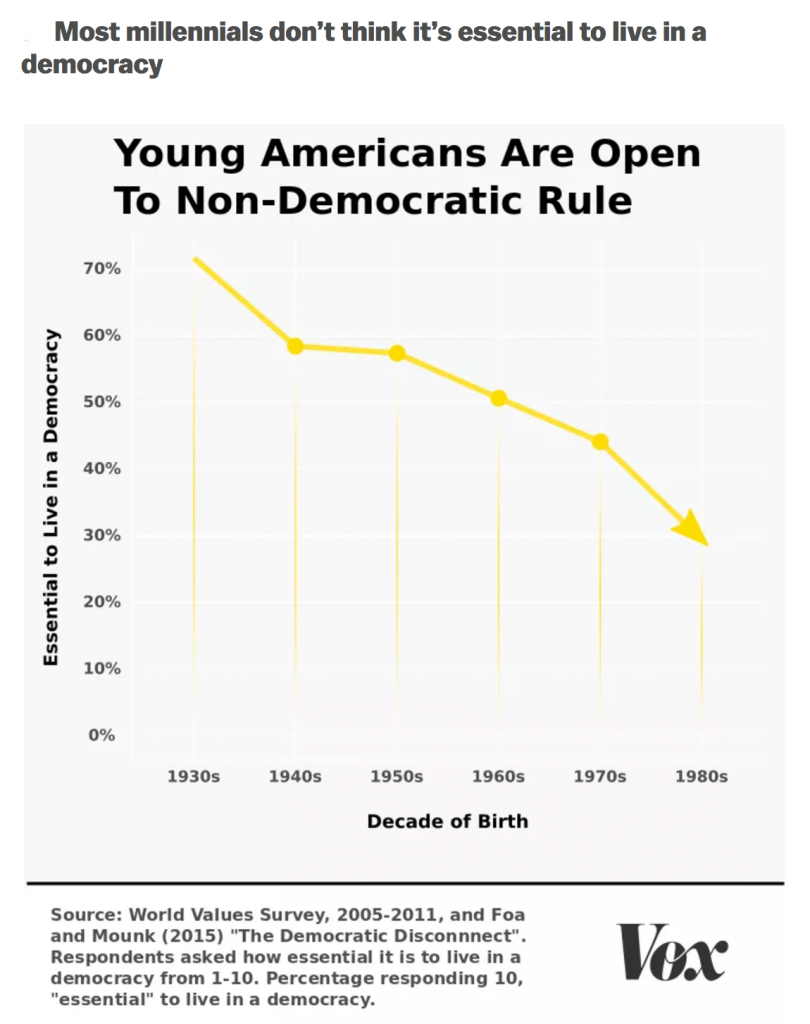 This disturbing research accompanies a growing and deeply alarming body of academic work that argues our institutions are too weak to support functional democratic processes (our friend Jon Rauch in Atlantic) and that the very idea of liberal democracy – credited with having stabilized world order since WWII – is now faltering as a central organizing premise of the Western world (Mounk and Luce and Brooks, among others). (See a number of hair-raising stats here; note that “liberal democracy” doesn’t refer to liberal vs. conservative but to liberal vs. illiberal or partial democracy)

Universities have long been seen and experienced in Western cultures as a place where the ideals of free inquiry and deliberative democracy are embodied – even as the paragon of these values and convictions. But in recent years, colleges across the nation have become front-page news for alarming instances of censoring particular voices and protests escalating to near violence when two ideas come into conflict. Universities may now represent a kind of collective “canary in the coalmine,” which is what makes campus difficulties especially concerning.

A problem of supply and demand.

This is one symptom of a much larger and broader cultural tension happening everywhere in America. As Americans wring their hands and wonder what could possibly be done, the irony is that concrete and practical solutions to these difficulties already exist. Research has long demonstrated that positive contact between groups can result in profound shifts in opinion and that working together on a superordinate goal creates a group far more open to diverse perspective. And for decades now, the dialogue and deliberation community has pioneered a range of ways to spark, stimulate and facilitate high-quality exchange across the deepest of divides. 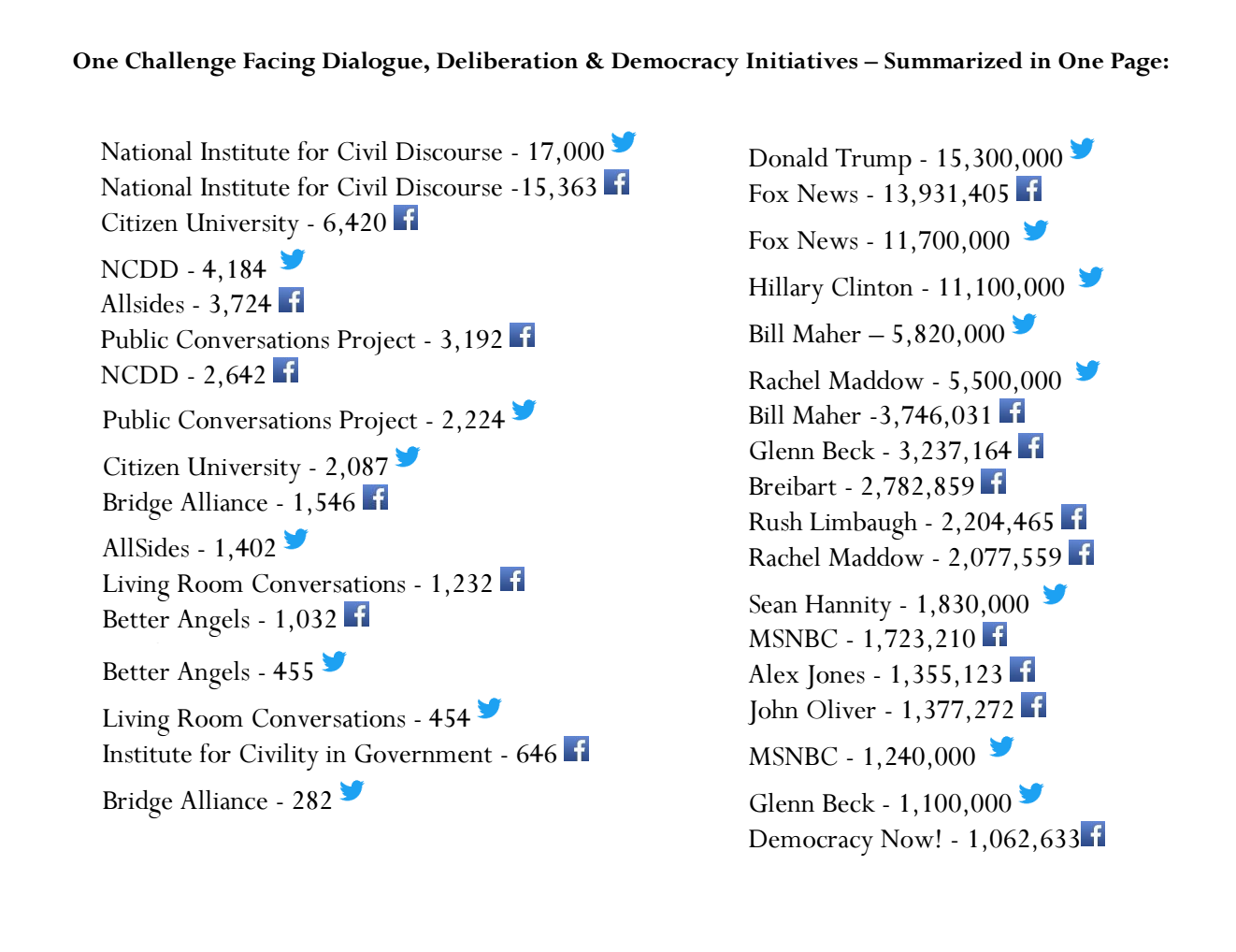 Despite all this progress, even with appropriately escalating alarm coming from all quarters, Americans are paying remarkably little attention to these on-the-ground, practical solutions. As illustrated by this side-by-side comparison (at right), the social media footprint of major bridge building organizations in America is being dwarfed by a loud contingent of professional polarizers.

When this “domestic peacekeeping force” does receive some kind of public attention, their work is, more often than not, perceived as some kind of heavy, boring civic duty (at best). Even at a time when lamenting the deterioration of civil discourse has become a new public hobby, we continue to see precious little natural market demand for what evidence says would be effective in building bridges between our feuding tribes (gathering across differences to seek common ground). Until and unless Americans – especially the kind of younger Americans filling college campuses – perceive the opportunity to engage difference as something worth investing in, most indications are that America’s civic ecosystem will continue to deteriorate.

But who doesn’t sense the hunger that Americans feel right now for some other way to engage politically? What could happen to bridge-building work if it were framed in the right way to inspire Americans? Similar to the hard work being done to preserve, protect and revitalize the precious wetlands or prairie lands in America, what would happen with more intentional efforts to do the same for our delicate civic ecosystem currently being threatened? And what if this kind of civic revitalizing began to receive the attention it truly deserved?

Rather than an abstract, theoretical initiative, this is precisely the work the Village Square has been doing for a decade. During this time, we’ve learned a great deal about how to build market demand for the dynamic embrace of ideological and demographic diversity inside geographic communities. We believe it’s time to scale what we’ve learned at American universities: the very place where American Millennials seem to be struggling most acutely to span divides.

The tragedy of the waning persuasive power of the idea of democracy among American college students is that our founding ideals are the very ones that have historically lead to expanding equality across vulnerable groups over time – as we’ve struggled to live into the promise that “all men are created equal.” While changes don’t come fast enough, they do come as “the arc of the moral universe” bends. This tragedy then compounds in predictable equal and opposite reactions – as the high ideals of the American republic lose street cred among young liberals, the sense of increasing threat to basic structures and central principles of democratic society escalates among young conservatives. Both are correct in central aspects of their concern, but failing to speak the same language they lack empathy for the “yin” to their “yang.”

We think there is no more urgent matter for this younger generation of Americans than to revive a belief in a dynamic and vibrant diverse discord as a gift of their democratic birthright – and to feel inspired toward citizenship that celebrates disagreement rather than seeks to limit it. We love the metaphor central to the Broadway play Hamilton, which embraces the hero arc of American democracy but reimagines it with the variety of faces that should have been a part of our founding (and with rap music). The Village Square has long embraced this kind of retelling of the hero arc of American democracy for a new generation (predating Hamilton by about 8 years, somewhat less financially successful; examples of our use of this specific metaphor are here and here.)

By overtly connecting the unmet promise of citizenship to its founding source with a fresh and compelling generationally-aligned edge, we can form common cause between young citizens from across divisions (bonus: you also decrease the perception of a threat to the basic structures of the republic that conservatives intuitively feel from social justice reform efforts).

The power and potential of the next generation.

The Millennial and Centennial generations of young adults are beginning to build a civic reality that will have the most enduring impact on the future of civil society, simply because they represent the longest duration of influence on the “moral arc of the universe.” Unfortunately, they are currently a powerful influence accelerating societal divisions – not just on college campuses but in their role as influencers in society more broadly.

But they also have a powerful potential to become a generation that can harness these powerful tectonic societal shifts toward a greater good. (Strauss & Howe, who pioneered the concept of “generational theory,” describe the archetype of this generation as a “hero generation” like the generation that fought WWII.) There is so much we see in this generation that suggests “hero generation” is an apt description of many aspects of their nature – they have broadly shown a heroic devotion to protection of vulnerable groups in society, to causes larger than themselves, to a worldwide sense of justice and progress. But they’re doing this inside of a dangerously polarized political climate and without the advantage of a strong civics education and life experience that helps them value, protect and improve the basic societal structures that provide stability to a liberal democracy (again, as contrasted with illiberal democracy). As a result, we have a generation that’s straining against the very societal values that support the diversity for which they advocate. A deep commitment to democratic principles fundamentally has to include a deep commitment to the value of not just diverse demographics, but to diverse opinion as a foundational condition for stable society.

We think it’s on college campuses where their hero arc can shift from accelerating tribal fury that is destroying democracy into the very vehicle that fulfills its ultimate promise. This has to be done without the finger wag of a nineteenth century schoolmarm and the dull “eat your broccoli” superego-based civics we’re predisposed to pushing. It’s got to have heart, soul and even a rebellious spirit – an id. In short, it must be transfixing to have a chance in the current environment. Our thinking must be big enough to meet the size of the challenge.

Yes, Imagination rules the world. The defect of our modern institutions is that they do not speak to the imagination. By that alone can man be governed; without it he is but a brute.

(sort of an owner's manual for humans)

race to the movies

Race to the Movies: An Unflinching
Conversation on Race + Popcorn
Movie night can build unexpected friendships and
real conversations about things that matter.