Craig: “Maybe I’ll get fired making this movie, but it will be nice to go down in flames together.” John: I’m perfectly happy to go to hell because I know they’re going to have so much barbecue.”

While producing a story for 60 Minutes on end time theology, journalist and religious skeptic John Marks was asked, “will you be left behind?” His ensuing quest for an answer sent him across America and back three decades to his college roommate filmmaker, author and Christian educator Craig Detweiler.

The result was both a book “Reasons to Believe: One Man’s Journey Among the Evangelicals and the Faith He Left Behind” and a film capturing their blunt and provocative conversations “Purple State of Mind: Finding Middle Ground in a Divided Culture.”

The ensuing conversations are equal measure unvarnished commentary on the deepest divisions of our time and a love letter to the power of friendship to cross them. 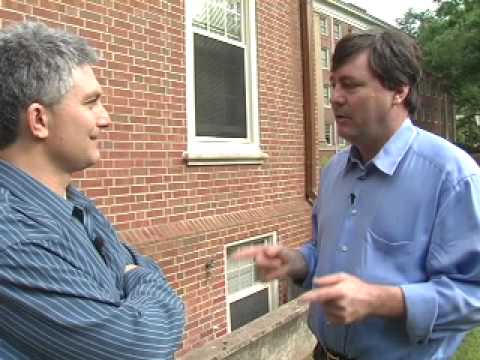 If you read anything or watch anything it’s likely you’ve seen John’s work. He’s the author of four books – “Fangland,” “The Wall,” “Reasons to Believe,” and “War Torn.” Formerly the Berlin Bureau Chief of U.S. News & World Report, John covered the Bosnian War and where he saw the devastation that can occur in a society that has devolved to see everything as an absolute dichotomy. John was a producer with 60 Minutes and Frontline, and has written for The New York Times.

“Reasons To Believe” is a warm, embracing but utterly unflinching look at evangelicals who practice the faith John was born into but has left behind.

Oh and he’s a President (of The Seattle School of Theology & Psychology). Formerly the coolest professor of communications at Pepperdine University (really, who doesn’t want a filmmaker for a prof), Craig was named Variety’s Mentor of the Year in 2016 (duh, what took them so long).

He’s the author of five books – his most recent: “Selfies: Searching for the Image of God in a Digital Age.” The others: “A Matrix of Meanings: Finding God in Pop Culture,” “Into the Dark: Seeing the Sacred in the Top Films of the 21st Century,” “A Purple State of Mind: Finding Middle Ground in a Divided Culture,” and “Halos and Avatars: Playing Video Games with God” and “Don’t Stop Believin’: Pop Culture and Religion from Ben-Hur to Zombies.”

Apparently John and Craig also disagree completely on the optimal length of book titles. It’s going to be a smack-down.

Their Talk: “Purple State of Mind: Finding Middle Ground in a Divided Culture.” We’re groupie fans of both of these dudes. Trust us, you’ll never be the same again.

The time-space continuum to consider: John’s in New York City. Craig’s in Seattle. It’s as if they thought putting a whole country between them would be an artistic metaphor.

What the pair would need to come to your school: Contact John, below, to have a chat on terms. (Note that U of Hawaii might just get a discount.)