When it comes to civil dialogue and productive disagreement, one of the greatest misconceptions is the perception that people are being invited to adopt a centrist “moderate” position politically.

Is that something you believe? If so, it’s time for you to meet Joan, a card-carrying member of the liberal elite, born and raised in Berkeley (where conservatives have been known to visit on occasion). Joan co-founded the Mother of All Liberal Groups, Move On – while attempting to encourage Congress and the media to “move on” from the polarization caused by Bill Clinton’s impeachment scandal (love him or hate him, you may not know that the Move On petition drew thousands and thousand of Republican signatures). Despite her success over the years, Joan ultimately concluded that “adversarial problem solving would not be able to address the issues facing our country.”

On that point, John fiercely agrees – a son of small town Kentucky who started life in coal country. With time working for Senate Majority Leader Mitch McConnell, John’s got the street cred in the reverse direction.  If you were satisfied to understand Joan and John by their two-dimensional Us vs. Them bios, however, you’d be missing quite a lot.

John works in Silicon Valley so he spends a lot of time with people like Joan (he even likes a bunch of them). Early to the internet on the Netscape Navigator team, John warned prophetically that the internet might not prove to be a utopian playground for embracing difference of opinion that pioneers had hoped for (oops). He launched his media start-up AllSides around the premise that unbiased news doesn’t exist (because of human nature) – so to really figure out what’s true we’ll need to balance one source with another source.

Joan isn’t predictable either – she has lobbied Congress with a Christian coalition leader and she’s been all over America giving talks with a co-founder of Tea Party Patriots. She’s warmly opened her living room to people from across the ideological spectrum and even invited the rest of us to do the same when she launched Living Room Conversations (they’re self-facilitated, in your own living room). 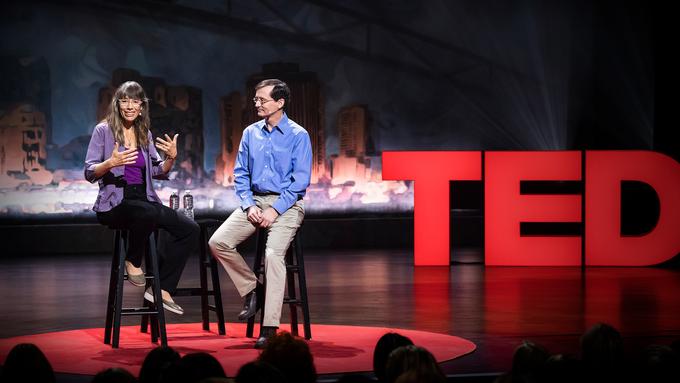 Joan Blades and John Gable: Free yourself from your filter bubbles

Joan is a mother, nature lover, soccer player, social entrepreneur and artist, who is a sincere, worried, and optimistic.

John is a quirky, tech-y, media innovator with a passion for making space for more than one view.

Joan on John: John is crazy smart, super nice and inexplicably a Republican. John reminds me in the best possible way about how I have way more in common with folks that have different politics than differences. I love working with him because our differences allow me to think more deeply.

More on their Treasonous Friendship: John and Joan few met a few years at a gathering in Washington DC of national leaders concerned with our growing partisan divide.  Sharing few political views, they do have one thing in common we can attest to directly – big, open hearts and a willingness to devote themselves endlessly to healing the division. If you see the “other side” in our politics as actively hostile to what is good for America, these two will prove you decidedly wrong.

Their Talk: “Free Yourself from your Filter Bubbles.” Here’s your eight minute preview of their talk – just imagine how the conversation goes from there! The experience: This pair is happy to bring a Living Room Conversation experience to your campus along with their talk (either during that event or as an associated event), just let them know if you’re interested. Election year special topic: “To Vote or not to Vote.” (Uh, we have a pre-existing bias on this one that we’ll have to just admit up front, John.)

The time-space continuum to consider: Both Joan and John inhabit the same part of the world – the San Francisco Bay area (even while interpreting that world a heck-ton differently).

What the pair would need to come to your school: Joan states, “honestly it depends some upon how much travel is involved and how impactful it sounds like the program suggested will be. If it feels like a valuable opportunity then I’m more inclined to do it. And we are grateful for honorariums!”  Joan requests whatever honrarium is provided to her becomes a donation to her nonprofit, Living Room Conversations.

Contact them to find out what it takes to bring this pair to your school.

AllSides provides balanced and civil discourse from both sides of the divide, freeing people from filter bubbles so they can better understand the world and each other. You don’t know the news until you’ve read AllSides news.

Living Room Conversations are intimate six person conversations co-hosted by friend​s​ with different views that create space for people to talk about significant topics and truly listen to each other.