What would happen if every one of the insults so prevalent around us, could turn into
reconciliation + healing every direction you looked?

In America today, political insults flow through the body politic like soft-drinks through our throats.  Sometimes, however…as we’re well aware, they cross a line.

Like when Pete Davidson, on Saturday Night Live’s Weekend Update, showed a picture of Republican Dan Crenshaw (a former Navy SEAL wounded in Afghanistan who now wears an eye-patch) and said this: “This guy is kinda cool…You may be surprised to hear he’s a congressional candidate from Texas

He added, in a faux-apology-for-laughs, “I’m sorry, I know he lost his eye in war, or whatever.”

The outrage that followed was somewhat predictable, in a culture where one errant mark can instantly elicit a strong reaction. Many went after Pete on social media — and the National Republican Congressional Candidate even demanding an apology.

Referring to this trend, Rep. Crenshaw (now elected) pushed back against the demands for an apology, saying in an interview, “I want us to get away from this culture where we demand an apology every time someone misspeaks.” Dan also noted, however, that veterans across the nation “probably don’t feel as though their wounds they received in battle should be the subject of a bad punchline” – adding that the joke “wasn’t even funny [or] original.”

And as expected, the apology came next: “In what I’m sure was a huge shock for people who know me, I made a poor choice last week” Pete said:  “I mean this from the bottom of my heart. It was a poor choice of words. The man is a war hero, and he deserves all the respect in the world.”

The comedian added, “And if any good came of this, maybe it was that for one day, the left and the right finally came together to agree on something. That I’m a d—.”

Dan thanked him for “making a Republican look good” and got in a few of his own jabs, before playing an Ariana Grande track from his phone (Pete’s recent ex). Then the congressman-elect got more serious:

“There’s a lot of lessons to learn here. Not just that the left and right can still agree on some things. But also, this: Americans can forgive one another—we can remember what brings us together as a country and still see the good in each other.”

At that point, Dan also mentioned the sacrifice of people “lost on 9/11, heroes like Pete’s father” a firefighter who died that day when Davidson was only 7 years old, as being among the heroes honored on Veterans Day.

More than an apology…

“It was a beautiful moment, unlike anything I can recall on SNL…Rather than trying to one up each other or score political points with their respective audiences, they made a sincere attempt to connect in a respectful and playful manner….That sentiment was a welcome breath of fresh air in a time when the slightest insult is met with instant outrage….The line that stayed with me the most was when he said, ‘We can remember what bring us together as a country and still see the good in each other.'”

Dean continued: “Seeing these two join in a message of reconciliation was moving. But the question has to be asked: Can we, in the time of Donald Trump, find common ground between those who oppose him and those who support him? It’s an issue that I and many others wrestle with.” He continued:

“Can we truly see the good in each other despite disagreeing so passionately on political issues? If we ever have a chance of becoming the United States of America — as opposed to people who happen to live on the same land mass — we need to do just that. And no, I’m not asking for a kumbaya moment where we all join hands and sing Elvis Costello’s ‘Peace, Love and Understanding.’ (Although I have to say I wish we could. It’s a great song).” 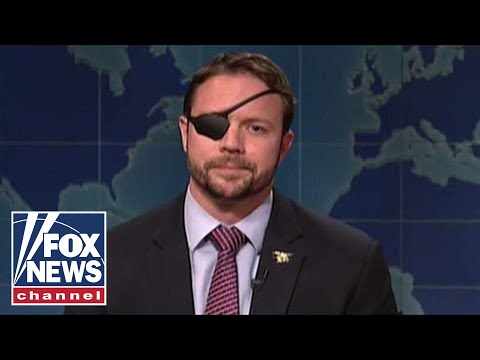 Dan Crenshaw on his 'SNL' cameo with Pete Davidson

Dan has said that one of his goals in Congress is to change the harsh partisan environment by helping to change the tone: “Everybody overstates their position so much that it’s causing serious rifts in our society.”

Referring to moments of generosity and humanity, the CNN reporter concluded: “Our nation is desperate for more of this, and I bet many people across the political spectrum would agree. The only thing stopping us from doing more of that is ourselves.”

It’s not just more political generosity our country is desperate for, of course.

A cry for help.

The internal burden of anxiety, sorrow and distress is overwhelming many Americans.  In late 2018, Pete Davidson himself posted this alarming message on Instagram:  “I really don’t want to be on this earth anymore. I’m doing my best to stay here for you but I actually don’t know how much longer I can last. All I’ve ever tried to do was help people. Just remember I told you so.”

In addition to an army of Pete’s friends coming to his support, Dan made sure to reach out too: “You don’t want to see someone in that position to the point where they’re putting out a cry for help on social media. That’s not a good place to be in.”

Dan said in an interview, “I talked to him personally yesterday and talked to him a little bit about it. We don’t go back very far, we’re not good friends, but I think he appreciated hearing from me.”

According to the veteran, he told Pete:

Imagine a world where every insult could be turned into compassion, grace, and friendship…