“When you get to know people usually your fears were unjustified.
If you’ve got 8 million people responding to my
insecurities, they must be having the same thing.”

Something as small as a phone call can change so much.

Heather McGhee, former president of Demos – now a distinguished fellow – was caught off guard when a caller requested her help to overcome some prejudices he himself had. As Gary put it, “What can I do to change…to be a better American?”

He genuinely wanted advice. The combination of Gary’s humility and Heather’s compassionate, empathetic response, turned this moment into a viral sensation. Check it out here: 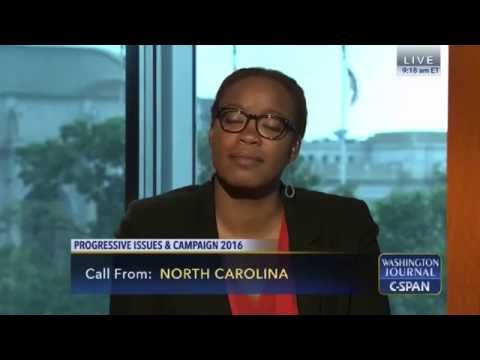 "What can I do to change? You know? To be a better American?"

Here’s a summary of the moment, along with some reflection afterwards:

In a media environment trading in insults, put-downs and who-can-get-the-last-word, the curiosity and humility in the exchange was strangely engrossing and captivating to many – with 11 million people watching a summary of the moment, which has been shared 180,000 times, generating thousands of comments.

“What a beautiful moment!” one person wrote. Another said, “Just the nectar I needed for my wounded heart today. So real and so important and so kind.”  A third commented that it was, “unfortunately a very rare human who admits faults and wants to better themselves. So very few are ever self-aware enough to do what he did…It would be an amazing world if he was not such a rare type.”

Becoming friends. In reflecting on this moment later, Heather described the “the basic human need I heard in his voice: to connect.” Given the racial animosities around us, she expressed a belief that “a lot of people saw something they hungered for in our exchange. To white viewers, here was a black woman who was morally clear but not angry. To people of color, here was a white man admitting his racism — finally.”

Garry reached out to her on Twitter after the call, and they have since had many conversations – including an in-person visit near his hometown in the Appalachian foothills of North Carolina. They met on a patio amid the changing fall colors with his dog nearby.

In that follow-up conversation, Heather was surprised when Gary reported he had followed her suggestions on how to change and was dedicated to “getting right about this before I die.” He talked about the fear he carried toward people of color, and how it had become a physical weight. “It’s killing me on the inside,” he said. “If I don’t change things, I could have a stroke.”

As Heather noted, “it doesn’t have to be a zero-sum game.”  Speaking about this kind of open conversation, Gary added, “It’s just something that we don’t practice, and taking that first step is the hardest thing.”

This one moment rippled out and made a difference for millions of people.  How about Gary?  As he put it in a follow-up conversation.  “When you get to know people, usually your fears were unjustified.”

He added, “There are so many things I did not know that I thought I knew.” In a later interview, he said, “I’ve changed a lot in a year.”

Media influence in shaping our views.  On the first call and since, Gary has emphasized the degree to which his media environment shaped his own conclusions:  “I depended on the media for my information. I looked at television shows like ‘Cops’ and ‘Gangland’ and these programs that portray minorities in a negative way. We have ideas we can get on the Internet, even if you are a white supremacist or any kind of a nut, you can always get on the Internet and find someone that agrees with you, that makes your views okay.”

But, of course, media can also help us reconsider and think again…as Gary & Heather have proven here.